Resources about the history of greater Cleveland and northeast Ohio. 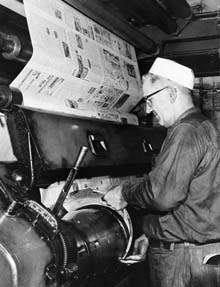 200 Years of Print Journalism in Cleveland

On July 31, 1818, The Cleveland Gazette & Commercial Register was printed.  Though only four columns and four pages in length and printed weekly, this newspaper marked the beginning of print journalism in Cleveland.  Scores of newspapers followed and then for much of the 20th century two newspapers, in particular, battled one another for Cleveland's readers--the Cleveland Press and Cleveland Plain Dealer.  Visit Cleveland Memory Project's Journalism in Cleveland to learn more about Cleveland's journalists, columnists, photojournalists, and editorial cartoonists.

As part of the bicentennial celebration, Dave Davis and Joan Mazzolini have published a new e-Book Plain Dealing: Cleveland Journalists Tell Their Stories.  It is a collection of personal essays by 25 accomplished journalists about their careers, colleagues, newsrooms, the people they covered, and about journalism in Cleveland.

Consult the research guide on Cleveland Journalism for a bibliography on the history of journalism in Cleveland as well as anthologies and collections of the writings of the city's journalists and columnists.

ABSTRACT: Newspapers are important resources for studying local history, for they offer detailed information not traditionally found in "serious" histories, such as social history data and, even when better sources are desired, newspapers can often provide dates and other clues about where such information might be found. There is no single index to all of the newspapers of Cleveland, historically, so a variety of sources must be used to locate information of interest:

Beyond these mainstream media publications, Cleveland has hosted (and still does host) many ethnic, trade, weekly and alternative publications.  A good place to explore this is the Encyclopedia of Cleveland History's article on Print Journalism.

One of my colleagues, Ann Marie Smeraldi, has assembled HERE a nice page of helpful tips on starting research projects and using our resources.