A guide for students or faculty to learn more about comics and graphic novels for research, learning, and enjoyment.

Hoopla - Access and read comics and graphic novels through the Cleveland Public Library. Get a CPL card at the User Services desk or online.

Queer Comics Database - Discover LGBTQ+ comics, graphic novels, and web-comics. Many titles are available to read free online, while others may be available through the Michael Schwartz Library.

Use OhioLINK and Interlibrary Loan to find and request comics and graphic novels for check-out through the Michael Schwartz Library.

Comics and Graphic Novels at the Michael Schwartz Library 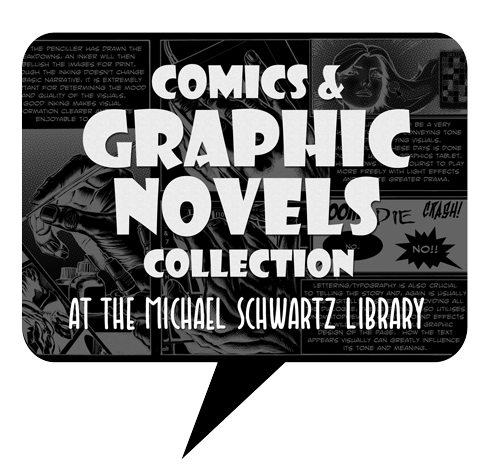 The purpose of this guide is to provide information and resources for the CSU campus community to find, read, and research graphic novels and comics.

The Comics and Graphic Novels Collection was created in the Fall of 2021 with the addition of 100 new titles, chosen with a focus on Diversity, Equity, and Inclusion. The collection debuted in Spring 2022 in its new location on the fourth floor library atrium.

This guide can also be used as a resource for students enrolled in Graphic Novel Studies courses at CSU. Graphic Novel course offerings have covered different subject areas including ENG, ART, and PSC.

Search Campusnet to find Graphic Novel courses offered at CSU and check out our page under the "Courses @ CSU" tab.

The Michael Schwartz Library offers a variety of graphic narratives featuring a range of topics and genres. New titles chosen for this collection highlight diverse voices and unique perspectives, while also showcasing the legacy and possibility of the comics/graphic novels medium.

Genres featured in this collection:

In order to offer a selection of titles which support academic areas of interest at CSU, the collection also features stories about Politics, Science, Technology, Health and Medicine, Environmental and Urban Issues, The Arts, and more!

Throughout this guide, the terms 'comic', 'graphic novel', and 'graphic narrative' may be used interchangeably. Terminology used to describe comics and graphic novels varies based on context, content, and format.

For more information on defining comics and graphic novels, see the following resources:

Highlights from the Collection